When you grow up in a town, you usually learn about its history through the public school system. Growing up on the Cape, I remember classes in elementary school that were devoted to our local history: the pilgrims first landing in Provincetown, the construction of the Cape Cod Canal and its bridges, the local cranberry bogs, and etc. But what about when you’re an adult and you move to a new place, how do you educate yourself about the local history? If you’re Danne Dzenawagis, you sign up for a “History of Watertown” course offered through Watertown Community Education. True story.

Last Thursday night, along with 11 others (surprisingly all under the age of 65), I sat in the Watertown High School library and watched a presentation led by Audrey Jones Childs of the Watertown Historical Society. It began in 1630, the year that Watertown was founded by Sir Richard Saltonstall, and went up to the present day. Although some periods of time were a little less exciting than others, I really enjoyed the presentation as a whole, and I honestly wasn’t expecting Watertown to have as rich of a history as it does.

I have to say too, especially with the Walmart issue looming, that it’s really unfortunate that the town hasn’t done more over the years to preserve its historical landmarks (this turned into a bit of a heated debate after the presentation ended). Watching before and after slides, it was so sad to see beautiful old theaters and taverns destroyed for 7-11’s and bus terminals. I don’t know if the town government was bribed by corporations of if the zoning laws are just really lax here, but it was truly disappointing to see how much of our history has been swallowed up by corporate chains and big box stores.

I won’t bore you with all of my notes, but here are a few facts that I thought were really cool:

The first 3 towns of the Massachusetts Bay Colony in the 17th century were Boston, Dorchester, and you guessed it Watertown. One of the first 3, who knew?!

When the first settlers crossed the pond from England they brought 40 tons of beer haha.

Watertown was the first town in the new colonies to have a protest against taxation without representation, cool huh?

At one time, Watertown was larger than Boston and it included land from the present day towns of Belmont, Weston, Waltham, and parts of Lincoln, Newton and Cambridge.

Because of its size and prominence in the early days, there’s apparently a saying that “Everyone is originally from Watertown”.

George Washington passed through Watertown in 1775, stopping to eat at the Coolidge Tavern (now the Galen Street bus terminal), on his way to take formal command of the army in Cambridge.

The Stanley Steamer, the first steam powered vehicle, was invented in Watertown.

And the best fact of all? We’re home of the frozen pizza! I really hope I didn’t mishear that one… 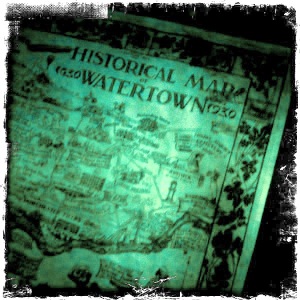